Hymen and virginity: How to separate myth from fact

The concept of female virginity seems to be a very complicated topic, with plenty of misinformation surrounding the issue. The notions of chastity and honor surrounding a woman’s ‘virginity’ only makes matters worse. So here is an attempt to unravel the mystery behind the Hymen.

According to Eisler, virginity is a social construct, not a medical reality. “While there is no medical definition for virginity, it is an important concept to many people, it’s built by social norms and beliefs even if it doesn't have a scientific basis.” To many, virginity means you haven’t yet been penetrated by the male organ penis, or your hymen has not been “broken”. In more general terms, it means you haven’t yet had sex.. 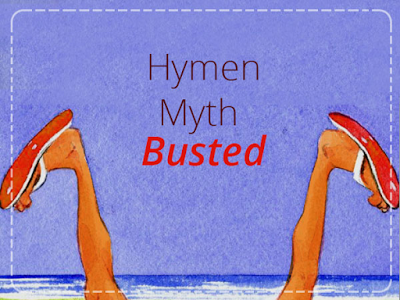 To bleed or not to bleed:

Bleeding in women during or after intercourse is pretty not unusual, however some women shed a few drops of blood the first time they have vaginal sex. According to Eisler, it doesn’t even have a huge blood supply, so even if it is intact, you may not bleed much or at all. “People make a big deal about whether you bleed the first time you have sex. But the idea of ‘popping a cherry’ is not the momentous event that a lot of people think it is or are told it will be,” Sometimes sex can cause bleeding from the vaginal mucosa, not the hymen, if it’s particularly dry or the movements are too fast or rough.

What is important to remember is that virginity is not a thing. Not really. It is a social construct meant to make people, especially women, feel badly about their sexuality and sexual experience. It is a way of policing other people’s bodies and passing judgment on how they use them. It is, at its very core, a way of controlling and subjugating women.

WHL Tip:  It is a good idea to touch yourself carefully ‘down there’, to explore and know how your body feels. Some women even use mirrors.

The WHL staff comprises a group of ladies out to give you exhaustive, practical health tips and resources.