Cancer occurs when our body cells are not in control and they start growing in large numbers.  Cancer can start in nearly any part of the body and can spread into different parts within a matter of months, leading to disastrous consequences.

Cervical cancer is a type of cancer that arises from the cervix and has the tendency to spread to different genital organs. Cervix is the lower part of the uterus that opens in the vagina. Most cervical cancer is due a virus called human papillomavirus (HPV), which also causes genital warts. 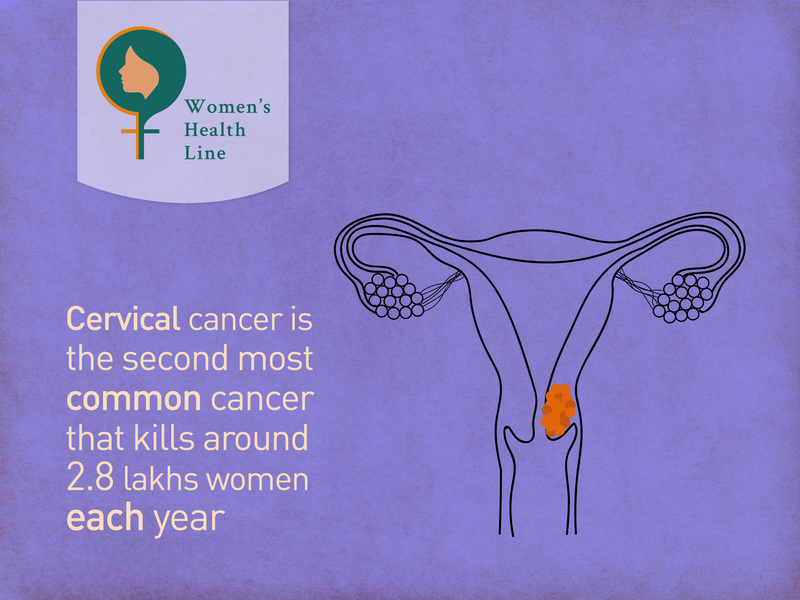 In an international study, it was reported that although there are 200 types of HPV, two human papillomavirus, HPV 16 and HPV 18 cause 71% of cervical cancers. Both of these are preventable by vaccination, but there are six other HPVs that cause cervical cancer including HPV 31, HPV 33 and HPV 45.

Also, women are exposed to diethylstilbestrol (DES) while their mothers were pregnant are at higher risk of developing cervical cancer. DES is linked with causing abnormal cells in cervix and vagina.

Common symptoms of cervical cancer are –

Usually cervical cancer does not have any prominent or major symptoms, but when it reaches the advanced stage the symptoms are related to their menstrual cycle, a yeast infection, or a urinary tract infection. Some of the common symptoms are –

How can it be diagnosed?

Cervical cancer can be diagnosed through Pap test. It involves swabbing your cervix with a device that’s similar to a cotton swab and then sending this swab to a laboratory for examining precancerous or cancerous cells. The American Cancer Society advises women to begin cervical cancer screening though Pap test at the age of 21, with an interval of 3 years until you are 30 years old. Also, when you turn 30 you should also start HPV testing and get it tested after every five years.

Worldwide, cervical cancer is the second most common cancer that kills around 2.8 lakhs women each year. In India only every year 74,000 women die due to cervical cancer and more than 1 lakh new cases are reported. They face a 2.5% cumulative lifetime risk and 1.4% death risk from this disease.

It is advised to vaccinate all young girls in the age group of 9-13. There are three doses that protect women from HPV infections that result in cervical cancer and genital warts. Most parents do not vaccinate their daughter fearing for the side-effects like redness, fever, joint pain, nausea, etc. but what they don’t realize is that these side effects can be treated but acquiring HPV at later stage of their life can create some serious issues with their health.

Other ways to prevent cervical cancer are –

The WHL staff comprises a group of ladies out to give you exhaustive, practical health tips and resources.